For many years, the swastika has been used as a symbol of good luck. The word itself is a Sanskrit word with a deeper meaning. When P.R. Sarkar, a Sanskrit scholar visited Germany in 1979, he broke down the word swastika into its different components in a bid to provide a deeper representation of the word. He gave the word the following interpretation: Su -“good”, asti -“to be, to exist”, ik -“what is in existence, and will continue to exist”, a -“denotes a feminine gender”. Hence, “swastika” means “good existence”.

Sarkar explained that the swastika can have both positive and negative expression. 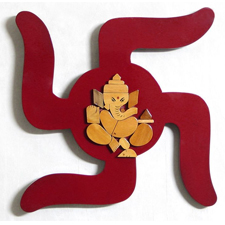 The work by the Schliemann was soon translated to mean that the German race descended from the Aryans. This was probably one of the reasons why the Nazi party formally adopted the Hakenkreuz as their party symbol in 1920. Since its adoption and the events leading to World War II, the swastika is now seen as a symbol of annihilation and racism. There have been recent clamors to reclaim the swastika’s original meaning. One of the recent attempts was the Hindu-Jewish Leadership Summit in 2008.

A new clothing company based somewhere in Europe, KA Design, has rolled out a series of gray t-shirts and sweatshirts bearing rainbow colored swastikas. According to KA Designs, the swastika on the rainbow-colored background symbolizes the LGBT movement and terms it “the new swastika”. It is clear that the motive was to bring back the swastika but the reception has not been as positive as they might have anticipated.

The gray t-shirts have several slogans on them including “peace”, “zen” and “love”, and a price tag of $20. From early indications, the shirts won’t be selling out anytime soon, no matter the good intentions of the makers.

Is It The Right Time To Reclaim The Swastika? 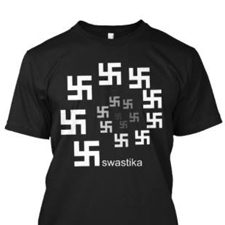 Answering a related question posed by Dazed, KA Designs said there is no right time to reclaim the swastika or anything at all. They said they were inspired by the aesthetics and shape and had the intention of sharing the symbol’s beauty, without its associated hatred. According to KA Designs, freedom is one of the most fundamental human values which should be a building block for our lives.

When asked how they would feel if their only customers were Nazis, KA Design was sincere and plain in their response. According to them, it doesn’t matter who bought the t-shirts since the main purpose of the project was to generate money.

KA Designs says they respect everyone’s opinion. They also understand the insecurities that many people might have about the product and their intention is not to erase the atrocities committed underneath a symbol from the minds of people. KA Designs believes that anything can be reclaimed as long as it is done through the right means.

The current designs of t-shirts and sweatshirts by KA Designs may not be the last we hear from them as there are ongoing plans for more projects which they have said they will not reveal now. However, they hope to extend their swastika line to more designs and colors while maintaining the current message of peace.

Do you think it is the right time to reclaim swastika or is it a project delving into at all? Tell us your views in the comment box.