The Rise Of Swastika Symbols: Any Cause For Concern?

The post-WWI era has seen a desperate attempt to prohibit the public use of the swastika and all other emblems and signs used by the Nazis. The numerous attempts go a long way to show the negativism now surrounding the swastika symbol which was once used for good luck and fortune. When Adolf Hitler hijacked the symbol, it became a unique identity for him and his army. The swastika was embedded on uniforms, boldly flown on the flags and was even used as a marching formation at rallies. 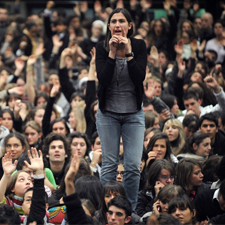 “Its public display can lead to protests or attract spiteful comments.”

Today, whenever the swastika is displayed publicly, it brings back memories that we would much rather forget. Today, the image is seen as a weapon of white supremacist groups. Its public display can lead to protests or attract spiteful comments. The negative reactions are tied to the atrocities Hitler used it to achieve -and they are difficult to erase from history. Hitler misappropriated the symbol enough to erase its true history and identity.

Through the course of history, the swastika symbol has been found in various uncommon places around the world. However, recently there has been a sudden rise in the rate at which the swastika is appearing in public places in the United States. The swastika has been seen around Pennsylvania, Portland, California, New York City and other places. It’s as though the harder the authorities try to crush the symbol, the more intimidating it becomes.

A few months ago, a fashion house, KA Designs, based in a yet to be identified location in Europe has unveiled t-shirts and sweatshirts with the swastika symbol on a rainbow-colored background carrying different inscriptions like “peace” and “wan”.

Most countries around the world now practice democracy where everyone has the right to self-expression and various other unalienable human rights. The rise of the swastika symbol could be a cause for concern. What if another psycho picks it up and tries to replicate the acts of Adolf Hitler? Since it is hard to erase history, the swastika is now seen as a symbol of oppression, particularly in the west. The symbol itself is not really the issue, rather the motive of the symbol bearer. The power and aura that trails the symbol make it a potent tool for scavenging and commanding a large followership.

According to the author of “The Swastika: Symbol Beyond Redemption“, Steven Heller, clamping down on the swastika is not a war that can be won. To extinguish it, you have to brainwash a whole lot of people and if you let it be it will brainwash a lot of people.